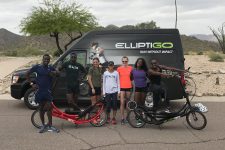 Heading into the 2017 school year, ElliptiGO launched its School Giveaway Contest in August, inviting high school and college coaches across the country from all sports to submit an application saying how their program would use the product and why they were deserving of this complete training package, valued at $3,000. ElliptiGO elite track and field athletes were stars at the USA Track and Field Championships, and many earned berths to the World Champs. For a handful of ElliptiGO athletes, the conclusion of the U.S. Olympic Track and Field Trials was just one more step leading to their ultimate goal – participating in the Rio 2016 Olympics. Emily Infeld, Colleen Quiqley, Kate Grace and Shannon Rowbury all qualified to participate in the Games, joining Meb Keflezighi, who had previously qualified in the US Olympic Marathon Trials, as well as several ElliptiGO athletes from other countries. A dynasty running program has emerged in Temecula, California. Since 2010, the Wolfpack of Great Oak High School has claimed seven state championships in cross country. At the helm of these juggernauts is Doug Soles, head coach for both the girls’ and boys’ teams – and a strong believer in training on ElliptiGO bikes.