Rider Conducts Own Experiment on Effects of ElliptiGO Riding

Juan Reque, a physical therapist and long-time runner, suffered a torn meniscus that limited his running. After a patient described the ElliptiGO bike, Reque took one for a test ride. Immediately, he knew it was a good workout. To test the efficacy of ElliptiGO training, he devised an experiment comparing ElliptiGO and road bike cycling with running. 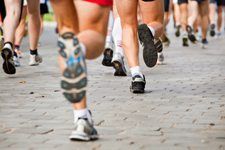 ElliptiGO Project athletes turned in a victory and top performances at the Boston Marathon and USA 1 Mile Road Championships this past month. Meb Keflezighi set the tone for the month with his historic Boston Marathon victory and new marathon PR of 2:08:37. TUSA Track and Field (USATF) named ElliptiGO Athlete Brian Pilcher the 2013 Masters Athlete of the Year this weekend at the Jesse Owens Awards and Hall of Fame Induction Ceremony.