Rick Hermelin took up ElliptiGO riding in 2011 to prepare for a transcontinental ride he would do at age 71. Now, we celebrate him turning over 40,000 total miles ridden since that first ride. 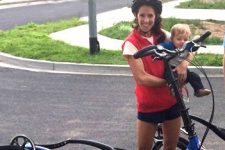 “Do It All” Runner Looking to Add More Accolades Getting Back in the Swing with ElliptiGO

When not riding his ElliptiGO 8C, Naoki “Tacci” Tachibana enjoys renting an Arc from ElliptiGO Japan and taking it on night-time excursions through the city, occasionally stopping to snap visually arresting images. “I really like the intense level of workout I can get on the Arc,” he said. “It’s great fun! On the roads and wooded trails of Eastern France, people have reported sightings of an interesting new character – a man sporting a wide smile as he whizzes by on a stand-up bicycle.