Imagine yourself participating in a 24-hour outdoor endurance event – exerting yourself physically in one activity, nonstop, through an entire day and night. Now think about doing that on an ElliptiGO bike, which requires 33 percent more effort than a conventional road bike. Okay, now consider how you would do that if you had been training indoors only for the three months prior to your event.

And to make this little flight of fancy truly outrageous, picture yourself breaking a four-year-old world record … in your first-ever attempt and riding for 24 hours. Sounds impossible, doesn’t it. But that is exactly what Tera Moody did at Bike Sebring 2017, Feb. 11-12. Moody, who represented the United States in the 2009 Marathon World Championships, covered 213.2 miles at the famous Sebring International Raceway, bettering Jill Paxon’s mark of 207.4 miles set in 2013. And Moody didn’t even ride for the entire 24 hours. She stopped after securing the record – in a mere 14 hours.

In her understated way, Moody said, “To say I have a world record is kind of cool. I would like to try again sometime when I’m properly trained and see if I can make the full 24 hour distance.”

Moody has only been riding an ElliptiGO bike for about two years. “My first time seeing the ElliptiGO was when my friend Meg Sullivan would fly by on the (Chicago) lakefront path. She let me hop on one day just for a second, and I knew it was something I wanted to try.” Sullivan works at Precor Home Fitness in Chicago, which is an ElliptiGO dealer. During the summer of 2015, Sullivan organized group rides in which Moody often participated. At one of those rides, Chuck Day, an ElliptiGO employee, saw how much Moody enjoyed riding and noticed her competitive drive. “For some crazy reason, Chuck decided we should all do Calvin’s Challenge, a 12-hour ride in April 2016. “I started having a very difficult time seeing how this was physically possible, but I decided to give it a shot. We did one 50-mile ride leading up to it, and I would sprinkle in some long bike sessions with 3 hour runs.”

Her goal at Calvin’s was to complete three 50-mile loops. On a cold, rainy, blustery April day, Moody completed those three circuits plus an additional 1.5 miles for good measure.

“Calvin’s Challenge was one of the hardest times I have ever pushed myself. I didn’t have the proper attire for rain and wind, and I paid for it. When we crossed at 151.5, I was elated, even though it was only just above our goal. I literally fell off the bike.

“Chuck told me about the world record and pointed out I only had to go another 50-some miles to get it, and I would have another 12 hours in which to do it. But at that point, I couldn’t imagine riding a step farther.”

Not So Horrible After All

Her second endurance effort was the Horrible Hundred in November 2016, where she joined Jordan Trump, another ElliptiGO employee and fellow riding masochist. She summed up that experience: “Again I was intimidated as I had never been up or downhill, and 100 miles felt like a lot considering my flatland training around Chicago. But it was great fun, and I learned how to change gears.

“After Calvin’s and the Horrible Hundred, in the back of my mind that (24-hour) record was always there. I love that feeling of accomplishing something in your mind that doesn’t seem possible.”

Pushing to the Limit 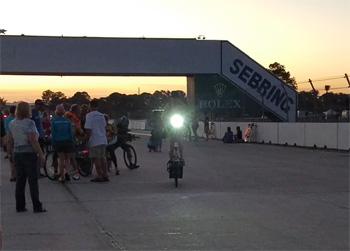 Moody goes out for a dusk loop in her over-night ride.

Moody and Trump used the Horrible Hundred as a tuneup for their real goal: breaking the respective gender records for a 24-hour ElliptiGO ride, which they would attempt at Sebring. In January, however, just one month before her assault on the record, Moody endured some health problems. That, plus the tender temperatures of a Chicago winter, kept her inside and off the ElliptiGO in the final month of training run-up. Heading into Sebring, Moody’s expectations were low.

“I hadn’t been on an ElliptiGO outside since November,” she explained. “Sebring became more about seeing what I could do, getting the feel of a 24-hour event, and then hopefully being better equipped to ride longer in the future.”

Despite the poor training conditions, while in the process of breaking the 24-hour record, Moody also obliterated the women’s record for 100 miles. Her time of 6:21:08 lopped more than an hour off of Carrie Hook’s 7:22:00 set in 2014.

Giving It Another Go

The fierce competitive fire that pushed Moody to go for the record hasn’t been extinguished. “I could have gone further, but it would not have benefited my body. I’m glad that I’m learning when it’s ok to call it quits.

“I do really want to properly train for a 24-hour ride and smash the record so far out of the park, it will be mine for a while.”