The Olympic Games are less than two weeks away and athletes from all around the world are headed to Tokyo. They have worked hard to achieve qualifying standards and separate themselves from the competition in hopes of being selected to represent their country. The Tokyo Olympic Games Opening Ceremony will commence July 23rd and conclude with its Closing Ceremony on August 8th. Of the hundreds of professional athletes that incorporate ElliptiGO-training into their routine, 23 will be competing at this year’s Olympic Games.

Though ElliptiGO bikes have been a consistent and valued cross training resource across all sports, this cross training modality has gained the most traction in Track & Field with hundreds of professional athletes using ElliptiGO bikes to train at higher volumes and intensities with less risk of injury. Seeing the hard work and dedication of these athletes in pursuit of their Olympic dreams is truly inspirational. Some are returning Olympians and others are competing on the Olympic stage for the first time. 23 athletes is by far the most ElliptiGO athletes we’ve ever had at this stage. In the past, we had nine athletes competing in the 2016 games and two competing in the 2012 games. 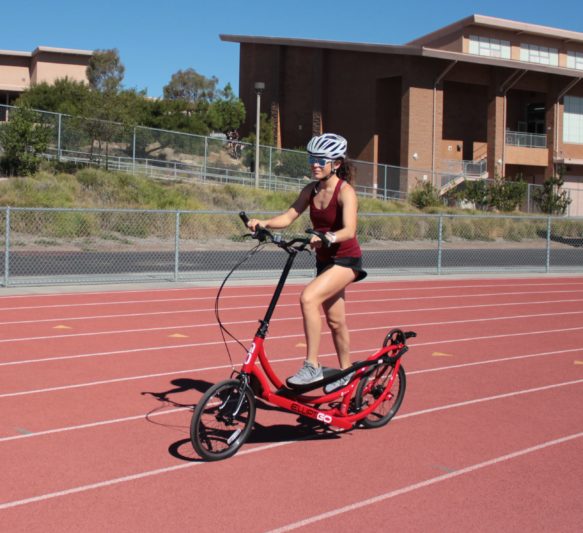 Track & Field events will take place July 30 – August 8 in the Olympic Stadium, with the exception of the Marathon and Race Walk events that will take place in the cooler temperatures of Sapporo Odori Park. Don’t miss a minute of the action and follow this guide on how to watch the events on NBC. Join ElliptiGO HQ and our entire community as we cheer on and tune in to watch the following ElliptiGO athletes compete:

Want more scoop on these world-class competitors? Read on to learn more about their unique stories.

If you’ve been following our updates, you’ve seen that three of these athletes punched their Olympic tickets in the Marathon at the Trials back in February 2020. In our latest post, we share the stories of these three athletes – Aliphine, Molly, and Abdi and their road to Tokyo. All three are currently training in Arizona in preparation for their races on August 7th (Women) and August 8th (Men). Each has their own personal story to go along with their success. Abdi at 44 years old is the oldest Team USA runner ever, competing in his fifth Olympic Games! Helping veteran athletes like Abdi continue to train at this stage is familiar territory for ElliptiGO. You may recall the journey of Meb Keflezighi, returning to his fourth Olympics at the age of 41, which at that time was the oldest Team USA runner. Another athlete returning to her fifth Olympic Game is Allyson Felix. Already the most decorated Track & Field athlete in history, Allyson continues to set new standards for what athletes can accomplish, especially those who are later in their careers and those who are also walking the path of motherhood. She’ll have her sights on another medal in the 400 Meters, as well as in the 4 x 400 Meter Relay.

One of the younger athletes creating a lot of buzz is Elliot Giles of Great Britain. Elliot is having the best year of his career, including personal bests in almost every event and breaking a 38 year old National Record. With his history of injuries and coming back from a horrific motorcycle accident, he went from being unable to walk for months to being a medal contender in the 800 Meters. Elliot has been a true testament to the benefits of ElliptiGO training: a very low mileage runner who is still performing at the very top of the sport. Here’s what he had to say about his training: “The ElliptiGO has revolutionized my training; it’s become my secret weapon. I’m an 800m athlete who runs 3-4 times per week, totalling 15-20 miles max. A very small amount of running in the running world but it’s made possible because I substitute most of my runs for ElliptiGO rides. It’s truly the closest thing I have found to running without the impact. The ElliptiGO has travelled the world with me and truly is a game changer in my training.”

As ElliptiGO continues to support training groups throughout the sport, one group in particular has certainly stood out, Team Boss out of Boulder, Colorado. They are sending four of their athletes to Tokyo, including ElliptiGO athletes Aisha Praught Leer (Jamaica – 5,000m), Cory McGee (United States – 1,500m), and Dom Scott Efurd (South Africa – 10,000m). Aisha has been using the product both through injury management and injury prevention to get her to her best shape for Tokyo. Coach Joe Bosshard quickly saw her success and has been writing that integration into the training for almost every athlete he coaches. 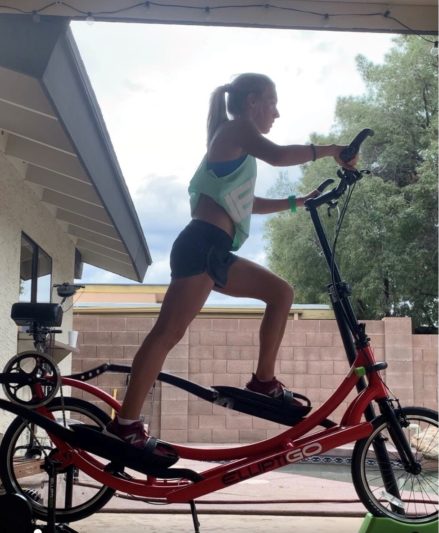 You’ve likely already noticed that most of these ElliptiGO athletes are competing in the longer distance events. Emily Sisson, who is competing in the 10,000 Meters, probably has the best chance of bringing home a medal. Emily started integrating ElliptiGO training after dropping out of the US Marathon Trials with an injury last February. She’s consistently utilized ElliptiGO volume as an alternative to risking higher running mileage, and is currently the healthiest and fittest she’s ever been. At the recent US Track & Field Trials in Eugene, Emily continued to push the pace from the front and unbelievably ran an Olympic Trials record in the process. We know Emily will be ready for Tokyo and be a contender to watch.

These are just some of the countless success stories that we could share about all of these athletes. As the games approach, be sure to visit their social media pages (click on their names above to visit their pages) and share your admiration and support for these inspiring individuals.

For more information about how hundreds of professional athletes, as well as high schools and colleges across the country, use ElliptiGO integration in their training, be sure to visit our Athlete page.