On August 27, Tim Woodier, a 35-year-old ElliptiGO rider from Abergavenny, Wales (UK), completed a 6800-mile odyssey by riding a borrowed ElliptiGO elliptical bicycle on a celebratory lap with several other ElliptiGO riders around New York’s Central Park. The journey spanned 87 days and took Woodier through Canada and 23 states in the eastern half of the United States. Throughout his self-supported trip, he relied on the community of ElliptiGO owners for lodging, food and entertaining diversions from the road. Incredibly, his route was largely mapped out one day at a time as an ElliptiGOer would enthusiastically ask Woodier to swing by her or his hometown. Along the way, Woodier stayed with 28 ElliptiGO community members, 22 people he connected with on warmshowers.org, one person from “couch surfing” and three people who were acquaintances of other people he met on his journey. He met all of his hosts/hostesses for the first time when he arrived at their home to spend some portion of a day and night taking in their local experiences. 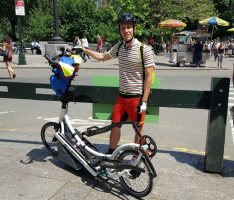 Woodier as he began his journey in Central Park.

After he returned to his wife and two young children in Wales, we caught up with Woodier and some of his ElliptiGO hosts to get their reflections on the nearly three-month-long experience.

ElliptiGO: Covering 6800 miles in 87 days is astounding, but you didn’t even ride every day. How many days did you actual mount up, and what were those days like?

Woodier: I rode for 59 of the 87 total days. There was a lot of monotony, but each day was also very different depending on the wind, terrain, distance I was traveling, road surfaces and traffic. Those factors could change drastically.

ElliptiGO: You went from Canada to the southernmost point of the U.S. The climate and geography of that span is amazingly varied. What were some of the biggest challenges you encountered?

Woodier: Constant all-day-long headwinds, notably heading north from Vermont to Canada I had 25mph winds with stronger gusts directly in my face. That was combined with rain – and on a 145-mile day. This ended up taking about 16 –and-a-half hours. I knew when I finished that day that I would reach all my destinations. My longest ride – 210 miles – was also into a headwind.

Lightning was also an issue. Daily thunderstorms through most of July forced me at times to seek shelter. It was often too hot to wear a coat so I just got wet, but this did cause some chaffing issues!

Three weeks into the trip, I got hit by a car in Canada. I cracked the footbed and bruised and bloodied my knee, elbow and hip. I also hurt my wrist, and that still hurts today.

Once I reached the Smoky Mountains, there were some big climbs. I recorded 15,889ft of elevation gain on that ride. I was expecting the two really big climbs, but those made the rest of the profile look flat. In reality, it was far from flat with short, sharp climbs and descents constantly.

Having to ride all day through the midday sun, heat and humidity of Alabama, Georgia, Florida and South Carolina was excruciating. I often felt close to passing out. After about a month of that, I began to feel as if I was rotting; small wounds wouldn’t heal as everything was constantly wet.

The last three weeks of the trip I had a constant headache which was made worse by riding. I also felt dizzy and nauseated often and had real trouble staying on my feet when stopped at traffic lights. I also had a toothache and earache for the last week and a half!

Thomas Russo, one of the ElliptiGO owners who hosted Woodier: Tim stayed with me in Ft Myers, Fla., for two nights. When he left, he had a 200 miles day on tap across Alligator Alley. I was concerned that he could be caught in one of South Florida’s severe thunderstorms, so I drove along with him in my SUV until he reached 125 miles and exited the Alley. On the way through the Alley, we came across an airboat tour. Right in the middle of the ride, I suggested we hop on one. His reaction to the idea … “Let’s have a go at it, shall we”! Piet Barber, an ElliptiGO host in Virginia: Tim was feeling some cumulative effects of the heat and humidity, so we didn’t ride much. This was the hottest part of August, and I think the heat was frying his brain a little bit. He even took an extra day at my house to recover. To aid his recovery, I took him on a flight in my glider.

Woodier: Gliding with Piet was amazing and a completely new experience.

ElliptiGO: How did you determine your route?

Woodier: Prior to starting, I posted a note in the ElliptiGO owners group on Facebook, asking who would be willing to put me up for a night. The route was made based on the ElliptiGOers who responded. I put pins on a map and drew lines between them. Where there was more than a day’s ride between people, I would find people on Warm Showers to stay with, and that would alter the route also. I went out of my way a few times to meet warmshowers guys who sounded interesting. For the actual daily directions, I used Ride with GPS the night before the ride to plan the route, sometimes asking advice of the people I was staying with.

I give a huge “thanks” to all, especially Carol Galgano as she let me take her best bike for the duration, which was incredible.

ElliptiGO, to Galgano: The ElliptiGO bike that you let Tim use is a custom bike that you put a lot of love and money into. Why were you willing to lend it out for such a wild adventure?

Galgano: Knowing Tim wanted to do an ElliptiGO ride up and down the east coast of the U.S. and part of Canada beginning in New York, and with me owning 5 ElliptiGO bike and not living far from NYC, I could not in my good conscience not offer him a bike. I assumed Tim would choose my only white 11 gear for his epic journey, and there’d be no way I could refuse him. He did keep me updated as to the condition of my bike, and honestly, I knew when lending it to him that we’d be able to maintain anything that needed to be serviced as long as the frame remained intact. We all know how sturdy ElliptiGO frames are. Tim maintained things such as the brakes and anything else that needed to be replaced when you ride (gasp) 6,800 miles!

ElliptiGO: This was Woodier’s first “real” trip to the U.S. He had visited New England when he was a child, but he didn’t remember much. On this journey, he experienced many “firsts” and other memorable experiences. Here are a few:

Clint Greenbaum, an ElliptiGO host in New York: Tim arrived at our home on Friday night, which was the Jewish Shabbat. Tim saw our family light the Shabbat candles; he ate the traditional Friday night dinner with us, observed the Friday night prayers, went to Synagogue with us on Saturday morning, and had his first lox, bagel and cream cheese sandwich. Tim said we were the first Jews he had ever met.

Marjorie Speer, an ElliptiGO host in Florida: We took Tim to Fanning Springs, one of many natural springs in our area, which is the cave-diving capital of the world. We went for a swim  in the springs, where it’s 72 degrees Fahrenheit year-round, and a hike around the park. Lindsey Abel, an ElliptiGO host in Pennsylvania: Tim ran the “Rocky Steps” at the Philadelphia Museum of Art. I took him to Valley Forge National Park. On the way back home, we started discussing guns in this country. He perked up when he found out we like to shoot, so we took him to the shooting range where he got to use my husband’s GLOCK 40 and .357 Magnum. Handguns are outlawed in the UK, so this was a unique opportunity for him.

ElliptiGO, to his hosts: Woodier will take away many fond and interesting memories. What will you recall?

Galgano: All of the fellow ElliptiGO riders who took the final loop with him could not erase from our minds the monumental challenge Tim successfully conquered during one of the hottest summers in history. He certainly did prove himself.

Russo: His accomplishment is mind boggling. Not only the endurance to ride the incredible miles with very little rest, but that he was able to make all of his scheduled stops on his appointed days/nights. Case in point, he told me in April that he projected that he’d arrive at my place on July 17th … sure enough he rode into town that evening.

Greenbaum: He couldn’t stop and get off schedule, since he had stays lined up. That’s pressure on top of a gargantuan effort. He’s superhuman! It was also great to see how the ElliptiGO family and others, throughout the US, were more than willing to host a total stranger from Wales!

Speer: I was absolutely blown away by Tim’s mental and physical endurance, as well as his nonchalant, fearless attitude about his monumental undertaking. He was relaxed and seemingly unfazed by the long miles of riding. I am in total awe of his accomplishment! And the kindness of the ElliptiGO community never ceases to amaze me!

Barber: When I’m tired, I make bad decisions.  I think it would have been very dangerous for me to do all this riding, because riding on a street requires a lot of concentration, and doing it for 8-10 hours a day requires a lot of mental endurance that I think is far more challenging than the physical endurance.

Tim was able to show how the ElliptiGO can set you free to experience the wonders of the road. Set a course, no matter how short or long, and get out there and enjoy your time On The GO!

ElliptiGO, to Woodier: We have just one more burning question, and it’s asked on behalf of every married person anywhere: How did you convince your wife to let you make this trek?

Woodier: I picked the right wife! She was supportive from the off. She knows that I wouldn’t have gone if she didn’t want me to, and that had she asked, I would have been on the first flight home.

Woodier plans to write a book about his travels, and once that’s done, return to the U.S. for two more extended trips: one through the Heartland and one through the western states, even adding in Alaska and Hawaii. If you would like to read more about his trip, read on.