I had the good fortune to spend some time in Washington, DC in October. It might be my favorite major city now. The streets are surprisingly wide and the buildings are all relatively short, giving the city a brighter and more spacious feel than NYC or Chicago. The National Mall really is spectacular and I had forgotten how amazing the Library of Congress is. The National Museum of African American History and Culture and The United States Holocaust Memorial Museum were highlights of the visit. Like all Smithsonian museums, entry to these museums is free and the exhibits are exceptional. Both were powerful experiences for me and I highly recommend visiting them. I also got to do some really fun rides in DC. There are some great trail networks that are completely separated from cars. I enjoyed riding the Rock Creek trail down to the Lincoln Memorial and then heading over the bridge to Arlington National Cemetery. From there you can go about 20 miles south on the Mount Vernon trail, which is a nicely paved bike path that goes shockingly close to the Reagan National Airport runway and ends at George Washington’s Mount Vernon estate. Rock Creek Park has some great riding, both on the trails and on the road. It is closed to cars on Saturdays, so that’s the best time to ride. One morning, Andrew Warby and I did some laps in the park that included a pretty good climb. He helped me understand just how out of shape I was heading into the ElliptiGO World Championships. That helped me scope my expectations for the climb up Palomar a few weeks ago. My favorite ride in DC was the first one I did. I didn’t really have a destination in mind, but was just following the nearest trail to see where it went. 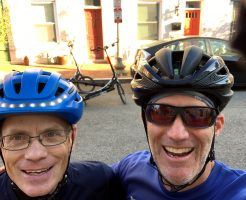 When I eventually made my way to Arlington, I realized that I must be close to the United States Marine Corps Memorial. I decided to head in the direction towards where I thought it was and fortunately arrived there a few minutes later. The last time I saw the memorial was at least 20 years ago. To my surprise, there were two promotion ceremonies underway. One for a colonel who had a 4-star Marine Corps general as his promoting officer. When I joined the Marines, there were only two 4-star generals in the entire Marine Corps, so seeing one in person was a bit of a shock to me.

As a random guy in workout gear riding an ElliptiGO bike, I wanted to avoid interrupting the formal ceremony. So I refrained from getting close enough to identify the General or many of the people there. The timing was great though, because every year around this time, I find myself reflecting on how fortunate I was to serve in the United States Marine Corps. Sunday, November 10th is the 244th Marine Corps birthday and Monday, November 11th is Veterans Day. I like that those two events always happen on consecutive days. Last year, a friend flew down from San Francisco at the last minute on the Marine Corps birthday so we could celebrate together. After enjoying very nice steaks in downtown San Diego, we walked around the Gaslamp district. We came across dozens of Marines, in dress blue uniforms, celebrating the birthday. I was shocked at how young the captains and sergeants looked, even though I am sure that many of them had led Marines in combat. Some of the captains were likely in charge of hundreds of people and equipment worth millions of dollars, but they looked like college students to me. That said, their combat experiences had likely taught them lessons about life and leadership that I may never grasp. It was nice to see that they were savoring this moment as much as my friend and I did, two decades earlier, when we were celebrating the Marine Corps birthday in the same uniform. As I watched them, I realized that if we had been born at different times, they could have been us, and we could have been them. National Museum of the Marine Corps

That’s the most interesting thing about history for me. All of the people who underwent the experiences that resulted in the monuments and museums I just visited in DC, were just people like you and me, born at a different time and therefore into a different circumstance. Not smarter or stronger or dumber or weaker. Just born earlier than us and into a circumstance that led them to play a part in a notable piece of history.

The last museum I visited in the DC area was the National Museum of the Marine Corps. It’s an exceptional museum located in Quantico, Virginia, the base where all Marine officers receive their basic training. The museum grounds are spectacular and the building is designed to resemble the famous scene of the American flag being raised on Iwo Jima during WWII. The entry to the museum is probably 100 yards long, paved in marble and lined with dozens of large Eagle, Globe and Anchor emblems on each side of the entry. Behind the rows of emblems are trees that appeared to be recently planted. Each one had a placard in front of it. The second placard jumped out at me. It had the name of a Marine, I had worked closely with, who had been killed in Iraq. It was then that I realized that each of the trees had been planted in honor of a Marine killed in battle. I finally understood that this wasn’t just a museum I was about to enter. It was also a memorial to the thousands of Marines who had been killed serving their country throughout the 244-year history of the Marine Corps. Just like the African American Museum isn’t just a museum about their history and culture. It’s also a memorial to the thousands of African Americans who have been killed in the struggle for racial equality, that has been going on for the past 400 years. Just like the Holocaust Museum is also a memorial to the millions of people who were exterminated by the Nazis during WWII and to the survivors of that genocidal effort. As the Marine Corps Birthday and Veterans Day approach this year, I am thankful to be a Veteran and particularly proud to be a Marine Veteran. I am also humbled by those who have sacrificed much more than I was ever asked to as a Marine, whether that was serving in combat, being on the front lines of the civil rights movement, surviving the Holocaust, or being a first responder in a time of crisis. I am hopeful that I will never be forced to exhibit the courage that these people have demonstrated and I am thankful to the men and women who make sacrifices each day to keep our country safe and progressing forward towards becoming a more perfect Union.