Ten years ago, Bill Pinnell commuted 13 miles on his road bike almost daily to his office in London, and he loved it. But then, he started developing back pain. A bulging disc in his lumbar spine finally brought an end to his riding as the hunched over position on a road bike was simply too painful.

In 2010, he moved from the UK to San Diego to start a new job. Being in the nice year-round weather tempted him to try commuting again, but he quickly found the road bike was still not going to work with his back. He tried a recumbent bike, only to learn “it was seriously hard work riding it up the hills!” around San Diego. 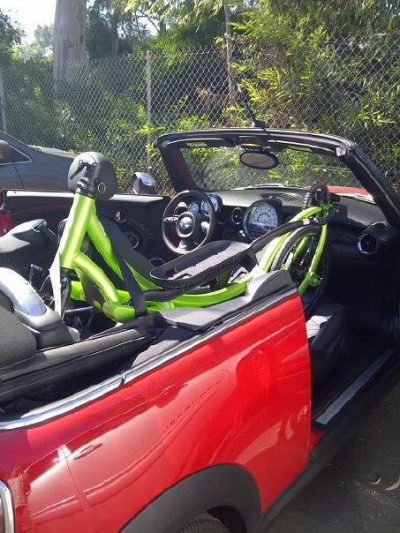 Then, on Oct 10, 2011 – a day he remembers as if it were yesterday – he discovered an alternative. Here’s how Pinnell recounts the experience. “I saw some guy riding up a local road … standing (!) on some kind of bike thing. I could immediately see his back wasn’t bent over, and I was intrigued. As soon as I got home, I Googled for ‘stand up bike’ and was amazed to discover the ElliptiGO – and their headquarters was only 8 miles away. I booked a test ride for two days later and bought it on the spot! They persuaded me it could fit in my Mini, and it did!”

Pinnell rode that green 8C more than 3100 miles in just over a year, then he upgraded to an 11R. Since then, he has ridden his ElliptiGO more than 20,000 miles and completed epic events with equally epic names such as “Breathless Agony” (114 miles with 12,000 feet elevation), “The Death Ride” (129 miles with 15,000 feet elevation) and ElliptiGO’s own “Every Day in May” challenge. As the years go by, his miles go up. Take a look at the chart below to see his totals over time.

That long-lasting, ongoing effort drove Pinnell to be the top point earner in the recently completed 2015 ElliptiGO “Get on the Map” contest. For his efforts, Pinnell is our Rider of the Month.

To record such massive numbers, Pinnell certainly benefited from completing the grueling, prestigious Paris-Brest-Paris ride, a 764-mile timed event that had to be completed in 90 hours or less. He finished in 88.5. (Pinnell was one of six ElliptiGO riders to complete P-B-P. Read about their adventure.) Just to qualify to participate in P-B-P, Pinnell had to complete a series of four rides – 200K, 300K, 400K and 600K – and all had to be done within strict time cutoffs. But those rides alone aren’t what set him apart. Remember, five other riders also completed P-B-P and the qualifying rides. It’s the day-in, day-out rides that all add up. Think of how this all got started – with him wanting to commute to and from work. He still does that on most days, covering 36 miles round trip. On weekends, he goes a bit farther, frequently up those hills he found so hard to climb on a recumbent. Once at the top, he likes to engage in another passion – photography – capturing the beauty of the California landscape, highlighted by an 11R in the foreground.

During busy weeks at work, he might only get in 70 miles a week. But in his long-distance training earlier this year, he covered 250 miles a week. Pinnell is truly a pillar of the Southern California ElliptiGO community. “Through the Facebook group and ElliptiGO newsletters, I soon learned about upcoming rides that ElliptiGOers were planning – from San Diego Century to impromptu rides up to San Clemente or just riding in the Encinitas holiday parade. I’ve now met hundreds of people, either ‘virtually’ or actually in person from all around the world. Everyone is passionate about the ElliptiGO!”

Perhaps none more so than Bill Pinnell. Congratulations, Bill!