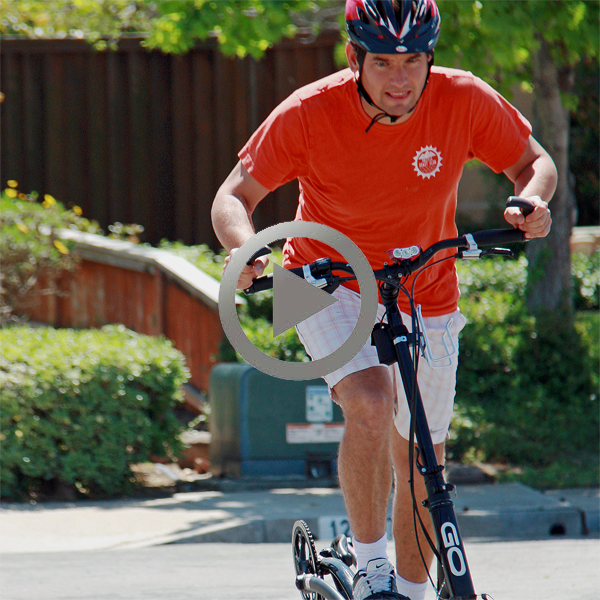 Juan Reque is a physical therapist who has worked with the ATP (Association of Tennis Professionals) and top tennis pros like Maria Sharapova, Rafael Nadal and others. He is also a long-time runner himself, having completed about 10 marathons, including three in under three hours. A few years ago, he suffered a torn meniscus in his knee that limited his running. He decided not to have his knee surgically repaired. Like many runners, he thought he could just run through it. What he discovered, however, was the pain kept him from pushing as hard as he was accustomed to doing. His mileage dropped and his weight increased.

“Although I never stopped running, I lost my running shape,” Reque said. “I was in a place where I was running with not much pain but could never step it up, kind of in a no-man’s land.”

Every day he would look out the window from his office at Injury Recovery Massage in Solana Beach, California, and see people riding bike by on these “different-looking bikes.” He didn’t know what to make of them until one of his patients told him about how those bikes gave a smooth, low-impact ride that was easy on the knees and gave a really good workout.

“I connected it and thought this must be the bikes I was seeing,” Reque said. The next day, he took an ElliptiGO elliptical bike for a test ride. “From the first moment I liked it, so I just kept renting the bike 2-3 times a week.”

Reque found the ElliptiGO bike was not only a good substitute for running, it also improved the stability in his knee and relieved the pain.

“Right now I am pain free and running at a high (for my standards) level again. I have done many half marathons under 1:30 and I am dreaming of running another marathon. The best thing is that I regained my running shape by only running two times a week. The rest of the trainings were on the ElliptiGO bike.”

Reque also occasionally rode a traditional road bike. During some workouts, he would think about how his road bike workout compared to a ride on his ElliptiGO 8S, or how an ElliptiGO ride would compare to running. He recalled hearing about some research report that compared those three exercise modalities, but he wanted to gather his own data. Using a heart-rate monitor and a nice hill in his Southern California neighborhood, he did the same workout three different days: one running, one riding a road bike, and one on his ElliptiGO bike.

“I found beats per minute from running and riding the ElliptiGO were pretty similar, but biking on the road bike in a sitting position was nearly 8-10 beats per minute lower.” (See his data in the chart below.)

His experiment led Reque to many conclusions, some of which have inspired him to make changes in his training program. But the most significant discovery was one that brings a smile to his face.

“I can say that ElliptiGO saved my running life.”

Watch the short video to hear Reque describe more about his experience, and read his physical therapy blog post on why he believes ElliptiGO riding is the best way to improve chronic knee pain. Reque rode or ran five repeats up a 665-meter hill at a similar exertion level and recorded his heart rate beats per minute (BPM).