In this month’s Featured Rider article, ElliptiGO chatted with David Mart, a well-accomplished rider and runner who has been able to stay in the game for decades. Humble about his talents, we want to share Dave with you as he personifies stamina and an ever ongoing quest for health, riding, and running at a high level.

Who hasn’t met a Master Runner, or Rider, seemingly defying all age bracket rules and showing no signs of slowing down activity level, and wondered how they do it?  Have they had that activity level all through their life, or are they fresh in the game? Do they have any training secrets? And, exactly how much training do they put in each week..?

We hope to answer some of those questions today! 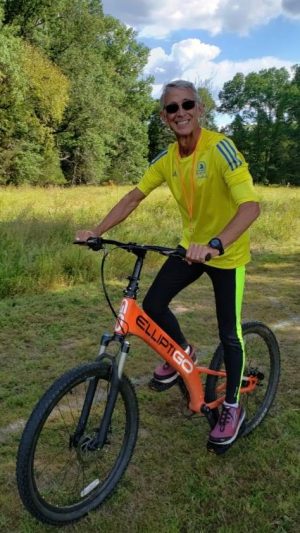 Dave, born in Iowa, lived there only until his father returned from the Korean War. For the next eighteen years, the Air Force moved his parents and growing family, five sisters and a brother, around the United States and to Germany.

During the Vietnam War, he enlisted in the Air Force, spending the next 30 years supporting the Department of Defense. Washington D.C was his last assignment and the area where he put down roots, living there with his wife, Cheryl, since 1998.

A Mid Distance runner, 880, the Mile and the 2 Mile as a junior and senior in high school in California and Arkansas, he kept in shape running occasionally after entering the military but it wasn’t a top priority. In the early 80s, Dave started competing in 10k races.

– “ I did well enough to get an opportunity to compete as a senior runner in the Air Force championships. I wasn’t good enough to be selected to the team but was honored to have had the opportunity. Family and career really consumed me for the next 25 years and once again running became an occasional activity.”

Like many runners, Dave had a long-held desire to run a marathon and began training for the Marine Corps Marathon when turning 59. He quickly learned that doing

Fartleks and bouncing off curbs as an older runner can cause Achilles issues and spent 3 months booted recovering from an injury.

– “Wish I had an ElliptiGO long strider back then to maintain my conditioning! I was able to defer my MCM entry for a year and finished my first marathon in 2013, a 4:05. The following year I got a tearful BQ at the Shamrock Marathon at Virginia Beach. I’ve been fortunate to make the Boston Marathon cut every year since 2015.”

Dave thinks he’s pretty typical of many runners (Although ElliptiGO knows there’s an extra layer of awesomeness.). Training until he got hurt, taking time off to recover, resuming training enough to run and compete, and repeating the cycle.

Achilles issues, strained hamstring, pulled calves and plantar fasciitis kept hobbling his training. Three years ago he decided to try and take his marathoning to the next level by seeking out a Coach and found Ian Connor, the owner of The Running Store in Gainesville, VA.

Ian was an outstanding steeplechase runner for Ohio State and a pro runner in his prime. Around the same time, Dave also happened on an article on Meb Keflezighi’s use of an ElliptiGO to supplement his training.

– “Meb’s testimonial convinced me it was something I should try. I got hooked during my first test ride and worked with Ian to integrate it into my training.”   -…”It worked for Meb and I believe it’s working for me.”

A typical training week for Dave: A long run (12-21 miles), a 4-5 mile drop-down run, and a speed workout of 6-7 miles. Every other day an easy run is substituted with an ElliptiGO ride. If the plan calls for 4 easy run miles he substitutes 3 times as many ElliptiGO miles. Typically, the day off is after the weekly long run.

Owning both an 8c, dedicated to indoor trainer use, and an 11R, Dave continues to learn how to best incorporate the ElliptiGO into his training. Always experimenting, whether doing hill repeats or simply cruising for many miles. As of writing, his longest ride has been 52 miles. Plans for this year include finishing a century ride between Boston and Chicago Marathon.

– “I love having the option to use the ElliptiGO indoors when the weather is frightful although I must admit I workout harder inside than outside on the GO since there are no hills to coast down. Inside I’ll vary the gears to get a phenomenally exhausting workout. “

– “The ElliptiGO has been a game-changer. I’ve integrated ElliptiGO training with my running for the last three years. I’m a true believer in the goodness of the long strider. …Using (The 8C) every other day in lieu of daily runs resulted in fewer injuries and allowed me to run a 3:27 marathon PR as a 65-year-old. It also allowed me to get through an entire marathon training cycle without injury. Last year I purchased an 11R so I could devote the 8C to indoor use whenever the weather is less than optimal or when my stupidity results in an injury that prevents me from running.”

For example, earlier this year, trying to pace athletes at Patriot High School in 400-meter repeats, he strained a calf on the fifth repeat. (Many Master runners know all about those unfortunate similar track shenanigans.) In the past, that would have resulted in a loss of conditioning but Dave was able to simply go to ElliptiGO workouts for six weeks while the calf healed.

– ”With these results, it’s obvious to me that ElliptiGO has hit on a winning recipe.” Then there was the metatarsal stress fracture at last year’s Boston in a pair of overused racing shoes…  An easy mistake made by many runners. The injury brought enough swelling to where it couldn’t be correctly diagnosed the next day at urgent care and a long period of healing out the forefoot fracture. Luckily, he could still GO to maintain his fitness. Completely healed, he ran CIM (California International Marathon, Sacramento, CA), last fall.

Asked if he thinks there is a secret weapon of sorts with the ElliptiGO, Dave believes especially in the lessened ground impact inherent to long-distance running.

– ”The ElliptiGO allows me to get a good cardio workout without the incessant pounding brought on by road running. Typically a strenuous ElliptiGO workout will get my heart rate up to within 10 BPM of that which I get from strenuous running.”

Dave believes anyone who can ride a bike should be able to pick up riding an ElliptiGO rapidly. For riders new to the ElliptiGO, he advises the same precautions as with riding a bicycle. For himself that means, among others, riding with a helmet, sunglasses, and a bright yellow top. The only downside of the top? Being stung, twice, by a yellow jacket who confused him as a potential mate or a threat.

ElliptiGO commands you for bravely training on Dave, and thank you for inspiring us this month! Contributed by Elinor Yee  – A rider considering herself lucky for each day on her ElliptiGO, drawing inspiration from fellow riders conquering obstacles big & small.

Want to inspire Elinor?  Contact ElliptiGO with nominations to Rider of the Month, or share your own story. It may just be the next feature!