In the Mathare Valley slum of Nairobi, Kenya, people are poor. Many children can’t even attend school.

So much of their future depends upon them rising above the challenges that poverty presents. That is where people like Jim Hansen come in. Hansen, a fifth grade teacher in New Hampshire, first visited the Mathare Valley in 2011 on a mission trip with his church to help the teachers and schools.

“I couldn’t believe what I saw in that slum of nearly one million people,” Hansen said. “People lived packed together in tiny tin shacks in a small 3½ square mile area. Despite the atrocious conditions, I fell in love with the spirit and dedication of the teachers and staff at the schools and of course with the Kenyan children. Most kids in the slum are not able to go to school, so if a child is sponsored, they know that the opportunity to get an education is the greatest thing they could hope for, and they work incredibly hard to pass the 8th grade test to get into a high school and then the high school tests to get into college and from there, they can lift themselves and their family.”

For his own mental health, Hansen needed that trip in 2011. He had just learned that he needed to give up running due to a bad hip. In fact, he was preparing to have arthroscopic surgery to repair a torn labrum a month after the trip. Hansen had been a runner since high school in the 1970s. He ran cross country and track through high school and college, and he began running marathons while in college. Soon after graduating, he started doing triathlons, completing five Ironman-distance races from 1983 to 1987.

Eventually, all the pounding caught up to him. Pain in his back and the torn labrum brought an end to the running and cycling.

Replacing the Love of Running

In early 2013, Hansen heard about the ElliptiGO Spring Classic race. “I bought an ElliptiGO right then to see if it could replace my love for running and allow me to do something competitive,” he explained. “Five weeks after I got my ElliptiGO, I rode my first (very hilly) century, and then I won the ElliptiGO race. I was hooked.” 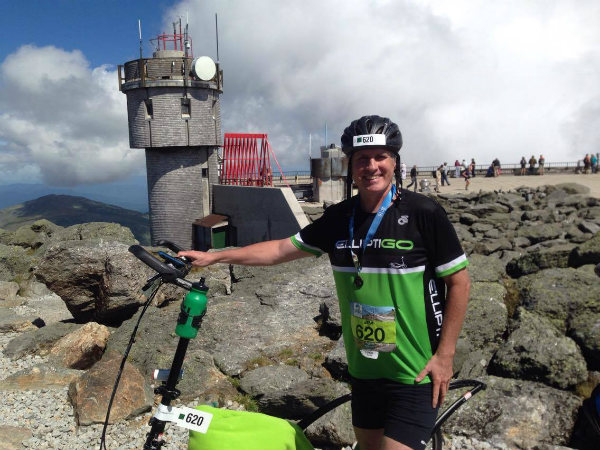 In the 3½ years since that first race, Hansen has ridden his green 8C more than 20,000 miles, always looking for a challenge to quench his competitive thirst. In August, he completed the Mt. Washington Auto Road Bicycle Hillclimb, the toughest bike event in the United States. The 7.6 mile route rises an average of 12% with extended section of 18% and a final 100-yard push of an incredible 22%. Hansen was one of three ElliptiGOers to reach the summit, joined by Andrew Warby and Jim Cremer as the third, fourth and fifth ElliptiGO riders ever to complete the climb. (Read about the first two.)

“There is not one moment where you can actually rest or relax on the ride,” Hansen said. “Due to the steepness, the ride is really slow, and you keep looking up at the rise of the road towering above you. It is quite a beautiful ride, but it has a constant deeply burning intensity that made it one of the most grinding and grueling efforts that I have ever had to make.”

Earlier this year, Hansen completed his 10th and 11th organized century rides – on back-to-back days – and he did his longest ElliptiGO ride ever with Tim Woodier, riding 110 miles from his home in New Hampshire up to Maine and then back home. For the conclusion of Woodier’s epic 6800-mile ride, Hansen went to New Jersey to accompany Woodier on his final leg into New York City. “That had to be the highlight of my year because what Tim accomplished is just unreal, and the ride into the city with other ElliptiGO riders was so much fun!” During Hansen’s first trip to Kenya, he met a second-grader named Gregory. “I didn’t work with him, but I noticed his positive spirit, and he was the subject of one of my favorite photographs which I later turned into a poem.” On Hansen’s return to Kenya in 2014, he got to know Gregory more as he was one of the fifth graders Hansen worked with to teach poetry and language skills.

Hansen has the students write a poem about something simple, yet significant in their lives. Their poems must begin with “So much depends upon …” To help them grasp the concept, he shares his own story about “a strange bike that they have never seen. I explain how I used to love running, but after hip surgery, I can no longer run. I tell them that I found this strange ElliptiGO bike and it allows me to get those good feelings back.”

He tells the students about how he and other riders participated in a bike ride that raised money for their school. Hansen tells them how a race director invited him to serve as the race pace leader in exchange for sponsoring another child at the school. That child happens to be Gregory’s younger sister. Hansen used a poem of his own to explain why this simple bicycle is so significant to him being able to help them: Gregory, now a 7th grader, often writes letters to Hansen. In one, he included the drawing of Hansen seen here. Gregory has learned the lesson well.

Read more about Hansen’s visits to Kenya and the children’s poetry.